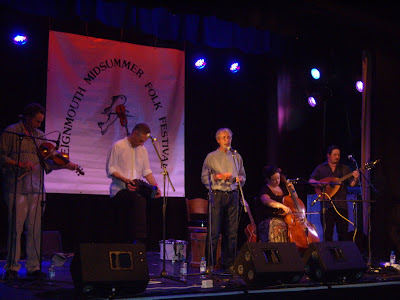 Down in Devon for a few days on a mission but coincidentally I noticed a while back that the Teignmouth Folk Festival would be running on the same weekend. And that Magpie Lane were headlining on the Saturday night...  So I bought a ticket with the hope that I could get to the gig.  Luckily - I did.

The venue was the Carlton Theatre just off the beach in Teignmouth centre, a small joint but very welcoming.  Backup on the night were Habbadam and Babylon Lane (no relation). The sound system was very good – a difficult balance to get in a space like this with the large selection of instruments being used. Lighting was somewhat surreal occasionally as was the occasional waft of dry ice – which was dryly amusing and received in good spirit. 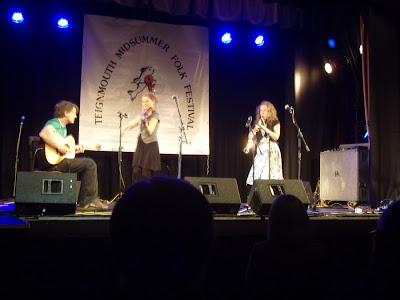 Habbadam are guitar, violin and soprano saxophone – an odd instrument for a folk band perhaps but it blended very well – something about the lemony timbre coupled to the power of a sax which made me wonder why it's not used more often. (Again – I was reminded of the old gag – folk followers being often a conservative bunch. But no one suddenly unfurled a banner with the immortal words emblazoned: 'Go home, dirty bebopper!). (Scroll down). Dane Sigurd Hocking played fluent guitar, the odd fluff early on perhaps, but blending with fiddle and sax to provide an unusual, intriguing set. The occasional vocal thrown in to balance it out – I found them much more interesting perhaps than the usual WBD Oirish set.  (Worthy But Dull).  Ditte Fromseier-Mortensen, also from Denmark, provided violin and vocals, Hanna Wiskari, the lone Swede, took command of the soprano. The material was unfamilar to me – based on the traditions of the Baltic Sea island of Bornholm - but oddly enough not, on another level, reflecting links between Scandinavian music and the British Isles. Some pleasant surprises as well - the Lars Ipsen tunes were plain weird with strange melodic arcs, taking the listener into a distant and wonderfully unusual sound world. (Ipsen was apparently an 18th century fiddler from Bornholm).  Towards the end, they brought on a local singer, Peter Huggins, to deliver 'Three score and ten,' the fishing disaster song from the East Coast that obviously resonates strongly down here as well.  In fact, with proximity to sea and rural Devon, the traditional musics and street dance/morris displays of the festival took on a relevance that is not always obvious back where I live these days in the urban Midlands.  Habbadam went out on a mainstream jazzy number to much applause - obviously a festival favourite and a band I'd like to see again.

Next up: Babylon Lane, a four-piece vocal group devoted to shape-singing. Interesting, but they didn't quite grab me, not sure why. I had to leave early in their set anyway – had a text message I urgently needed to reply to – so did not have time to settle in to their music to offer an opinion.

Magpie Lane. Mr Giles and band came recommended to me very strongly a few months ago when I was urged to attend a gig back home when they were playing just down the road from God's Little Acre. They blew me away – and few folk groups do that. Ian Giles has a remarkable voice and buttressed by the talent that surrounds him, this is a band with much firepower – instrumentally and vocally. In the present incarnation: Andy Turner/Sophie Polhill/Mat Green/Jon Fletcher play concertinas, melodeons, cello, whistle, fiddle, guitar, bouzouki and harmonica. And all sing – when they suddenly burst into five part harmony it is a joy to behear, offering a majestic swathe of sound. That first time I encountered them was in the upclose intimacy of a folk club, this go-round the more formal setting of a concert. Even though the Carlton Theatre is a relatively small venue and the band would have spent much of the weekend fraternising and playing on sessions in close contact with festival goers, amplification and stage still give a couple of degrees of separation. Which, tellingly, did not seem to make any difference. Big gig, small gig, there is tremendous skill involved here that covers all the bases, yet is not jammed in your face but subtly held back a notch or two. A lot of power under the hood... Much traditional folk music is ideologically conflicted for many reasons, historically, culturally – and often stupidly. Possibly, playing in the idiom is like learning a foreign language. For some people, surface accuracy and varying degrees of misplaced piety are enough and a certain stiffness is inherent to the delivery. For those who enter deeper into the cultural episteme(s) beneath, the rewards will be fluency and emotional engagement with the material and the audience they deliver it to. (This also goes for the listener: most of the folk audience come to the music from outside - some initial effort is usually needed to connect with the material). Giles sings with an ease and flair that subtly belies his technique and knowledge.   As do they all. The references are backwards historically, based in the main in the English country dance and song tradition, yet the band's ease of technical erudition channels the material effectively . It lives and breathes before you, rather than being a ghost dragged reluctantly to perform at a séance.  Opening with 'The Jovial Cutler,' a song from the cusp of the Industrial Revolution concerned with earlier work practices that still continued, a strategic piece that looks back at a dying world and forwards to a newer, problematic urban existence.  The timbre of Ian Giles helps to keep these old songs fresh – resonant and flexible, not given to decoration and some of the more affected ticks of the 'tradition.'  The achieved clarity and the warm emotion with which he delivers it front the band well.  But this seems a democracy of many interlocking skills: Giles will disappear occasionally to let other line-ups play in varying combinations, down to duos – Sophie Polhill and Mat Fletcher gave up a stunning 'Turtle Dove,' for example.  Hard to pick anyone out over their compatriots – they function so well on all levels it seems, held together by the dark threads of the cello's weavings. (An instrument I love and how fascinating to hear the ways in which it is deployed).  Giles amusingly said that they 'mucked' songs about, finding different tunes to well-known words, that sometimes this worked and sometimes it didn't.  This willingness to continually expand and experiment give them a bracing freshness.  A couple of examples: 'A begging I will go' and 'The Foggy Dew.'  The first floated across the dance tune 'Grimstock' in a fascinating reworking of an old chestnut, the second given a more delicate and plaintive reading than usual.  Giles also dons a side drum occasionally which gives some added muscle in the rhythm department.  Nothing 'folk rock' (mercifully – in most of its manifestations a lumpy mess) – rather than clumsy grafts of backbeats, he plays from the song itself.  He uses two drums – one orthodox snare, the other a deeper military-looking artifact, sort of a quarter-lambeg on the diagonal, that looks like it was nicked from the set of 'Sharpe.'

They bow out on the encore unaccompanied: 'The Constant Lovers' aka 'Drowned Mermaid.' The five part harmonies here gave an amazingly full sound, the voice interactions on the verses – from solo to duo, adding another level of interest. I know they have been criticised for being too lush vocally but I love this expansion that seems to stretch until it fills the hall (and beyond).  But I'm a fan.  And look forward to the next time...
Posted by Rod Warner at 6:54 AM