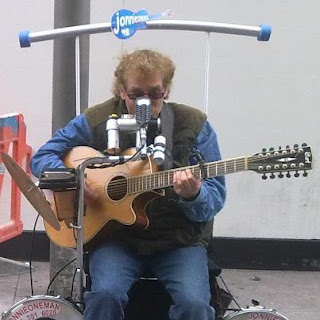 You get older and by the nature of the game, people fall around you, go before. It doesn't mitigate the shock and the loss, of course. Given my rackety health (no doubt mainly a consequence of: 'Drinking and gambling, night-sporting and rambling,' to quote the words of one of my favourite songs, 'The Banks of the Bann,'), it is an ongoing source of amazement that I have out-lived so many friends, bloodbrothers and sisters. But it still hits hard when another close one goes, very close, almost the same age and as far as I knew a damn site fitter than this old boy. But we are taken... this is the nature of things and we deal with it according to our various beliefs. I was in Liverpool a few days ago, having booked a very cheap hotel deal way back when I saw that the Tate were putting on their triple wham: 'Turner, Monet and Twombly.'  Late paintings by these three, the latter of whom is a big favourite so I had decided to go up north for a gander. Liverpool is a place I don't know very well but had good times in on a previous trek to see the mighty fire jazz saxophonist Charles Gayle a couple of years back. The exhibition was very good and I could see how they yoked it all together to grab late works by these three painters into the frame, as it were. But another story.

Later, I was in a pub checking my emails and flicked onto Facebook, saw some odd posts about my old friend John, caught a message from his eldest son to put up my phone number. Rang my daughter for her to check what I suspected. Which was that he had died the day before. Later I spoke to his youngest son and then his wife who was obviously distraught. The rest is private stuff. But it was a fucking shock.

John Ware and I go back, as they say. I met him over forty years ago, early 70s, when I was ensconced busking in London and he arrived in town.  We met and got talking - he was stuck for a kip so Barbara and I put him up. Oddly, we hit it off straight away, as it has to be said that in those days John could rile people, because of his speed of thought, his intensity and his manner. Interesting people have grit which can rub the wrong way for the unwary (no pun intended). We started playing together and at this distance of years, after all the many musicians I have worked with, I can still say that there was something very special between us. I loved playing with him, really enjoyed his music and we managed to pull together an act very quickly. By that time, the London busking scene was getting overcrowded and many of us had already developed other circuits. So we played in the declining years of that phase – which I would measure from Don Partridge's Busker's Concert in 1969 as the high watermark – everything started to fall off after that. A few months after the Albert Hall gig, for example, I was travelling around Europe, in 1970 I went to Dublin for the first time and subsequently visited it frequently, at some point taking John over with me, a year or so after we met. He moved there eventually and even though he travelled extensively on the continent as all buskers did, Dublin became his base. Mine too for a few years but when I moved on at the end of the 70s John was happy to stay, especially as he had met his wife to be by then. They stayed together through all the vicissitudes and craziness that will come down on relationships with musicians and buskers especially. The road can be merciless and John had his demons, as did many of us. His courage in facing them down a long time ago now and choosing a life with a family - three boys, now men, a strong and beautiful wife - over cheap and easy thrills, has always impressed not just me but all who had the fortune to know him.

In later years, after finely honing his musical craft, he took a sudden turn and started painting. This was a man with talent and an urge for expression that now came out in exquisite and unusual watercolours. Some people have a special gift. He was one of them, whether playing and writing music (he was an underrated songwriter), or exploring this latest passion, art. He even founded his own gallery to flog his work – ever a busker!

The last time I saw him was at our mutual friend Don Partridge's funeral a couple of years back. I had been planning on visits over to Dublin to see him and Anne but never made it due to illness and circumstance. That's the way of it. I am still coming to terms with the fact that this brilliant, annoying, sparky and sparkling man is not around on this plane of existence anymore. He was always vibrant, alive. Now he has moved on.

And in writing this: I cannot alleviate any of the grief his family will be feeling. But I can bear witness to someone whom I knew very well and a friendship that lasted from the first day we met and is still strong in my heart. A small remembrance is the least I can offer up... My daughter Amelia and I offer our condolences to Annie and the boys, to all the family.
Posted by Rod Warner at 3:40 AM 2 comments: