The Lows and the Highs...

with more exciting projects to come...
Posted by Rod Warner at 1:16 PM 5 comments:

Labels: The Lows and the Highs 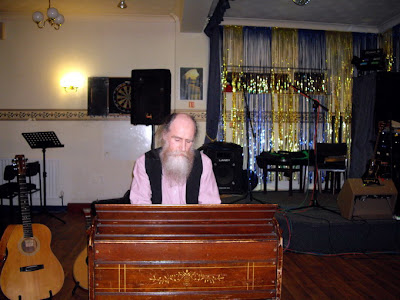 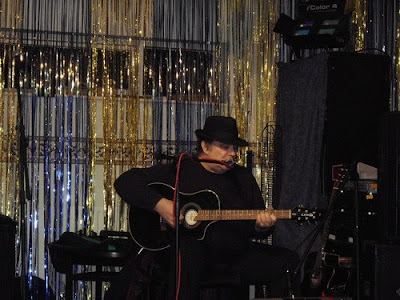 Back from Berlin... and a wander down to the Loughborough Acoustic Club with Mr Marmion to see John Kelly in a double-header with Big Al Whittle. An intriguing combo – Kelly mainly focuses on traditional materials, deployed in a unique style that uses harmonium and guitar as backing for his high, pure voice. Big Al – rumbustious blues/old jazz/nouveau music hall for want of a better term. The latter better suited to the venue – one would have thought. Yet John Kelly, seated at his harmonium in front of the stage and eschewing the p.a. - which is usually considered necessary in this club given the proximity to the bar, managed to weave his spell, drawing a rapt audience deep into his unique sound world. Performing, with his usual relaxed and gentle humour, a run through half a dozen or so songs – 'Banks of Ponchartrain,' Leasy Lindsay,' 'Lady Gregory,' among them... I have written before about John – here – but to repeat – he has a refreshing purity of vision that is not the stifling ignorant 'purism' of so much English folk music. Rather: a strong sense of purpose and skill that transforms even familiar material, spinning well-loved songs sideways to reveal new emotional depths.

Big Al Whittle has a George Melly-ish side to him – larger than life and rooted in American blues and jazz. Without the annoying campness and overwrought bathos of the late Melly... Al's Americana accent whips back into local dialect when necessary to refute any 'blackfacing' and his broad good humour is buttressed by his crisp, accurate picking skills – opening on a couple of standards – missed the first one as I was in the jakes releasing some of the Guinness, but I caught up with 'It's a sin to tell a lie,' - which had the bar staff singing along and doing some nice steps. Al writes songs such as 'Trish' (whose mini-skirt went 'swish, swish swish') – an evocation of long-lost and unrequited student love back in the earnest revolutionary day of Mao's red book and other murderer classics of late marxism: 'Trish, Trish, she was a communist.' 'Aunty Nellie,' a celebration of a game young lass's exploits during WW2 with our American cousins. Set in a 12 bar blues structure but sung in broad local accent – 'you've been having hankie pankie with those Yankees down in Burton Wood.' Great ribald stuff. Mr Marmion was laughing so much I feared for his health. As was I. Other joys – 'Buster the Line Dancing Dawg.' (Further explanation here...)... plus a link to a version of the song by the great Jack Hudson(!)). And 'Big Red Sausage.' Hmmmm... As for his song about Brides in the Bath murderer 'George Joseph Smith' – almost finished us off – 'drown 'em in the bath, drown 'em in the bath, drown 'em in the bath because I'm a psychopath.'

Note that Big Al's web site has links to all these songs. Worth buying the album, I'd say...

A great night – the contrast in styles created an interesting dynamic and spread the time further than I would have thought – two half-hour-ish spots seeming much longer with being so crammed with fascinating and funny musics...

As a footnote – Big Al reminded me glancingly of a local musician, Dave Turner, whom I saw many years ago playing in his hometown of Nottingham and surrounding areas. Dave also fused blues picking with baroque streams of comedic thought. Unfortunately I discovered he had died recently. But the anarchic spirit lives on... 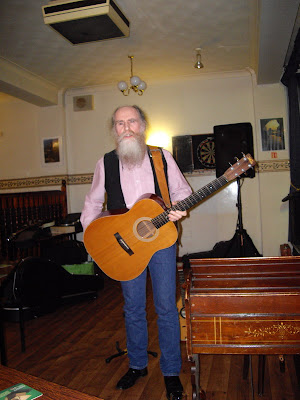 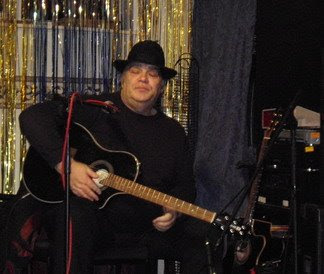 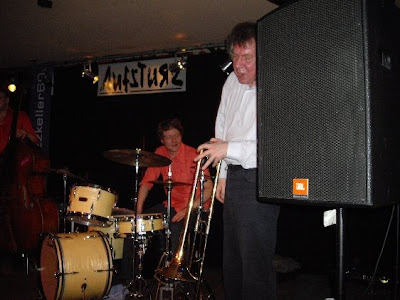 A foul wet night – but we braved the weather to go to Aufsturz on Oranienburger Strasse – via a pint of Guinness in an Irish bar full of loud Brits. To see a quartet – Gebhard Ullmann reeds/Johannes Bauer trombone/Jan Roder bass/Oli Steidle drums. We had great seats, just getting in before the joint filled up and what better way to spend an evening than up close and personal to some excellent free jazz? The band played several long numbers that never seemed to ramble – possibly because the razor sharp drumming of Oli Steidle kept everything on track plus the variety of instrumental techniques that were used offered a large field of expression that held the interest throughout. Bauer is a rip-snorting trombonist who occasionally channels echoes of oldschool tailgating that interestingly ground the band in the older jazz traditions (I'm sure at one point I heard a quote from 'Ory's Creole Trombone!').Well capable of playing off the modern orthodoxies – fleet fast lines – he also showed an impressive personalised range of extended sounds and colours. Wows and flutters, mumbles and muttered whooshs plus he used a variety of mutes including a plastic cup. Gebhard Ullman moved between tenor sax, bass clarinet and bass flute and matched his front line partner all the way – with much humour at times as they sparred with each other. The bassist was a little sunk in the mix from where we were sitting down the front (maybe the balance was better in the rest of the room?) although he came through enough to demonstrate plenty of skill and drive. He ranged from fast pizzicato to his own experiments in granularity – clothes pegs stuck between the strings to distort and break up the sound, rubbing the strings with his shirt-sleeved arm, using the whole of his instrument as a sound board, bowing beneath the bridge etc... Ullman similarly travelled from some straight ahead blowing that extended frequently into squalling higher register forays or dropped into quieter, breathy sound colouring, sparse questioning squawks on the mouthpiece of his instrument. The set started with musical fragments/pointillist dabs tossed, caught and developed and the performance always offered contrast and variety via furious dense passages to occasional sections of almost straight four rhythm to more abstract sonics. The dynamic levels throughout were varied – right across the terrain from quiet passages to storming fire music. The drummer especially kept a tight rein on things – occasionally upping the game with rapid loud splatters that drove the front line into interesting responses – at one point Ullman was swept up by a percussional barrage that provoked a wild free blowing retaliation, with the bass dropping out and leaving them to it. Bauer's turn came and he showed his class in riding the storm - no quarter asked or given, some brilliantly savage drumming here as the trombonist blatted out roars, smears and flurries of notes. Interesting to ponder that 'free jazz' from the sixties onwards actually rooted the trombone back in the earlier modes of playing by utilising the natural expressive qualities that had been somewhat flattened out by the fast-moving linearities of bebop.

The whole performance tinged with good humour throughout – the musicians were smiling, enjoying themselves and at the end played around with an almost slapstick call and response silly sounds section played for laughs. This is how the music is meant to be heard – and understood, I suspect. For all the wildness and extremes of range, being in the room meant you could follow the improvisational logics more clearly than on cd/record. Also – the ridiculous canard that anyone can play this music gets killed off pretty quickly when you witness the skills on display... 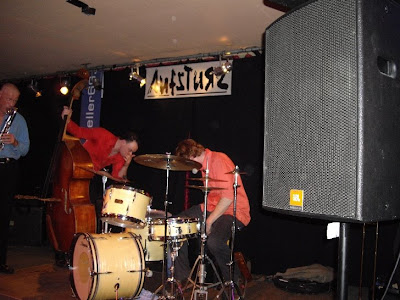 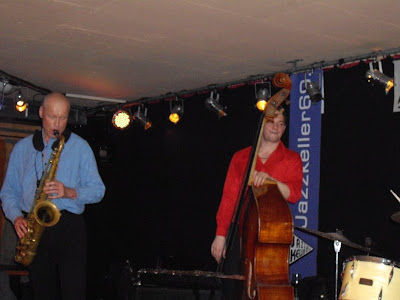 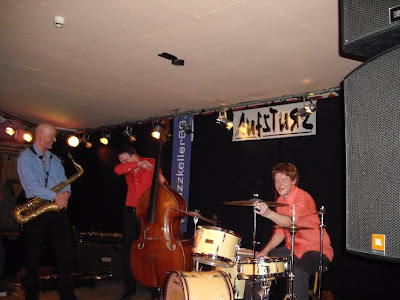 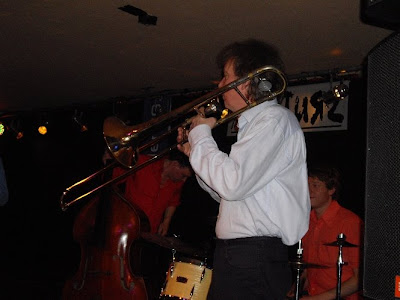 A great night at Aufsturz - Johannes Bauer/Gebhard Ullmann/Jan Roder/Oli Steidle giving their all... more later...
Posted by Rod Warner at 6:39 AM 1 comment:

Blogging has been a bit sparse of late - maybe I'll have more time this week - off to Berlin this morning...
Posted by Rod Warner at 12:57 AM 1 comment: