Bookends – Booker Little, with Booker Ervin beside him in the frontline on a 1960 session, originally issued under the leadership of Teddy Charles. Recorded at the Museum of Modern Art, some fiery blowing here. The track: 'Scoochie.' Ushered in by a sharp burst of drums from Eddie Shaughnessy, who drives the band on throughout. Booker Little takes the first solo, twisting a sure-footed elegance into his lines. Ervin leaps in directly just as he finishes, full-throated tenor spurred on by the drummer's interjections. Mal Waldron follows, utilising his trademark phrase-worrying to good effect. Teddy Charles adds splashes of vibes throughout but takes no solo unfortunately...

I always check 'Destination Out' before I post – apart from it being a great jazz blog, on several occasions a weird synchronicity has come into play and a track that I have prepared for upload has already been featured by them in the same week. This particular selection is an example – I sidelined it a couple of years back for that reason. But: just been over there and we are ok and I figure two years is not a clash in the making. So...

There are times during this performance of 'Winged Serpent' when one fears for the piano's health as Cecil Taylor smashes out vast clustered eruptions with the ferocity of a lambeg drummer on an Orange parade in Belfast. This is the pianist leading an 11 piece ensemble mixed between American and European participants – his 'Orchestra of Two Continents,' recorded in 1984. Held together by fragments of melody, the soloists emerge from the boiling maelstrom thrown up by two drummers and the ever-dominant Taylor piano which chases and harries the front line towards a higher glory. Then Cecil solos – a wild violence perpetrated on the piano, as mentioned above. The ensemble assemble again, taking up the minimal theme, before suddenly dropping into a slow fall. Exhilarating...

Lee Morgan in 1957 on a classic Blue Note date – also noted for tenor player George Coleman's debut recording. 'City Lights,' the title track – opening on see-saw bowed bass and horns before moving effortlessly into a kicking hard bop swing. Coleman out the gate first, then Curtis Fuller, a little four square perhaps but his usual pleasing gruffness. Then Morgan, sounding older than his years, superb trumpet. Ray Bryant takes some bluesy lines before Paul Chambers displays his arco technique. Morgan returns to trade with Art Taylor. Shortish solos all round give this track a compressed and pithy texture.

One for Obama... I don't comment on the politics of other countries and, as an ageing anarchist, my experience in life has led me to mistrust all politicians, whatever the angle they come from. But it would be churlish not to wish the U.S.A. well on this deeply historic Inauguration Day. As we sink further into the mire here in the U.K., in the spirit of a wider sense of hope I offer this late track by the mighty John Coltrane. Recorded at Temple University in 1966 (for radio – there is an annoying bit where the commentator comes in), this is 'Naima.' The theme is barely hinted at before the roller-coaster ride begins. Looking at the tracks uploaded here and the collective intelligence, fire and beauty on display - if only politics was as uplifting as music...

I had a request for a re-up: Cecil Taylor. A cheap blog-out - no point re-writing so I can give what I put up at the time (with some minor edits):

'"To play with Cecil Taylor you need the stamina of an athlete and the imagination of a god." (Tony Oxley)

I love this quote... 'Last' from the album 'Nailed,' recorded at the Bechstein Concert Hall, Berlin on 26 September 1990... yes, it's heavy and fiery and wild but – I find this music exhilarating! A concert recording, Parker tussling with Taylor's lines – or the other way round at times, as Barry Guy and Tony Oxley – the Old Firm – grapple to underpin the reeling streams of notes. This is a long track... there are two on the album, the other clocking at about 50 mins: I wasn't sure about posting such a large chunk, but here goes... Any red-blooded collector wants their own solid copy anyway... and once you've been bitten by Cecil and co, it's hard not to resist the lure of their brand of sonic adventuring. This is a long track, yes – but it's full of interest all the way. Commencing with deep piano notes slowly spaced and then a couple of chords as the bass enters, the piano responding with more elaborate lines as Oxley cymbals his way into the opening spaces. A meditative start with busy bass behind the slo-mo piano – unusual and not the usual Cecil fire and brimstone - but not for long! Taylor starts to build up the intensity as a three way dialogue rises, suddenly erupting in splashing chords and the trade-mark lightning fast runs. This is densely packed music, brutal and bouncing at the same time. Music that almost demands an evolutionary response – to rise to a point where it can be truly appreciated on all of its levels. Oxley's customised drum kit sounds totally distinctive, his cymbals sizzle and splash like no one else's. Guy's bass a little buried at times, felt rather than heard. Ten minutes or so in – and Evan Parker joins the throng – the crowd of three expanded by his multiphonic saxophone, a man with the technique and ideas to match Taylor's speed and density of line – linear and vertical simultaneously it seems. This is heavy company but the sax player sounds undaunted. I've seen Evan Parker several times down the years, solo and in different combinations: he always impresses. I feel that he has been so consistently good for so long that he is almost taken for granted, in an odd way. A home-grown genius who vastly expanded the post-Coltrane saxophone: of how many others can we say that they achieved anything near that level of sublimity?

This sort of music throws up different challenges – how do you respond to – or lead - Taylor's cataclysmic style, for one? Go for the spaces in between? (Small and microscopic as they undoubtedly are?) Float across it – as Jimmy Lyons did, whose metalanguage of expanded bebop out of Parker melded so well with his piano playing partner, finely honed down their years of playing together? Or match it note for note - as Parker does here? As glanced at above, coming out of Coltrane, originally, (who only made the one record with Taylor - an interesting but flawed document as the rhythm section, good as they were, just didn't fit) and developing his accurate high-register work that expanded the saxophone range mightily coupled to his circular breathing techniques, Parker here rises brilliantly to the challenge, equal and more to the task. This is relentless music where there is so much going on on all levels. My only criticism is that the bass, as mentioned, is just a bit too far down in the mix – but that was probably a casualty of live recording levels and Guy's presence registers sufficiently for him to share in the glory. Just under twenty minutes in and Parker drops out – the bass can be heard a little better now, fast and loose, stepping up to the challenge. They start to slow down, Taylor muting the pyrotechnics, playing his own brand of acid lyricism, mirroring the quiet beginning as Guy displays his own virtuosity. They slowly wind down - to end on a high singing bass note. 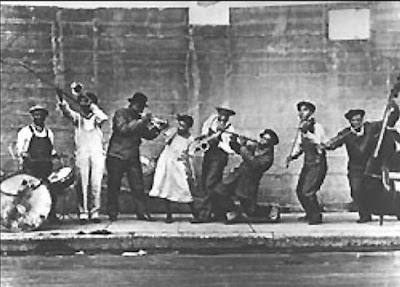 Slowly getting back into the field... I promised to re-up this a week or more ago. The Clusone Trio, playing '117th Street.' (7 beyond 110th up into Harlem?). Anyway, no point re-writing, at the time I said:

'The Clusone Trio give the Herbie Nichols tune, '117th Street,' an outing. Always an element of drollery lurking when Bennink is involved – those crazy Dutch, eh? This swings in lightly over crisp old-school drumming as Moore states the theme and take the first solo – a limpid performance that builds through some more complex swirls into earthier smears. Reisjeger picks his cello through his turn before Moore returns for a brief passage then back in to the theme. Bennink throughout is in homage to earlier drummers mode. An odd mix of the old and disguised hints of the new, filtered through a wash of post-modernism, done with some affection... '

To keep it rolling... some early stuff. From one of the main sources, King Oliver's Creole Jazz Band playing 'Mandy Lee Blues.' The cutting edge of 1923... In his prime, soon to be overshadowed by his young protégé Louis Armstrong on second cornet and eventually falling from great heights of fame to riduculous obscurity but in the canon as we stand now because of his adventures with muted horn as much for his bandleading abilities - bending the trumpet away from the straight sound to echoes of the human voice and timbral shifts beyond - the line goes forward to such as the mighty Bill Dixon, to pull a name out of the ether... A calm controlled strut, mainly featuring Johnny Dodd's clarinet - but the King comes in later with some wah wah... Classic.

The Book - doing 'Autumn Leaves.' Muted trumpet sax intro - then that big-hearted horn booms in at a firm tempo to take the theme in his usual imperious fashion. More of that clenched trumpet from Richard Williams - drums busy him along nicely. Mr Ervin steps up and boots it up a gear - as he always did. They call(ed) this hard bop but BE had something else going for him that transcended those boring labels. The pegs we hang stuff on because we are lazy in our delineations, perhaps. His tone is somewhere near the keening edge of John Coltrane's but with an earthier dimension - fast blowing and all blues. One of my favourites, anyway... Cath and I have been figuring out a version... Les Feuilles Mortes encore... Nice to play behind a singer again...