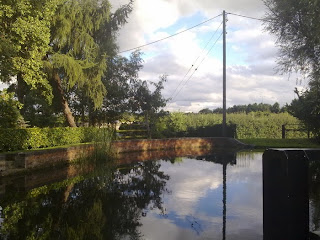 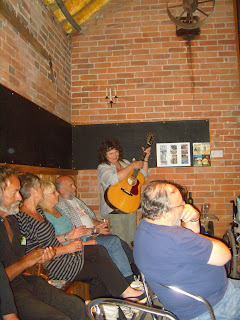 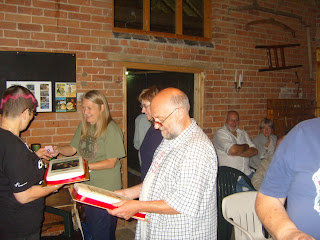 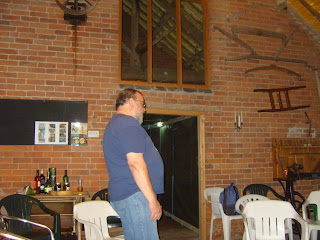 There had been clouds all day, with a hint on the wind that we might get rain, but luckily the inevitable shower only hit late on and was mercifully brief. This was to be a unique event: organised between the Tiger folk club and the Grand Union with the co-operation of the owners Jeff and Kath, as a fundraiser for the ongoing refurbishment of the Shepshed Water Mill. An advance ticket job, barbecue provided, a tour of the restored mill and then music – an informal folk session, mainly unaccompanied, leavened with a smatter of guitars and accordion.

Venue: idyllic, to use an over-used word. On the backroad from Hathern to Shepshed, near to the M1 yet tucked away, folded into an older landscape, the ever-present swish of fast-moving tires a faint – and oddly soothing – soundtrack. What the writer Iain Sinclair calls 'motorway hymns.' A lot of work has been done here - refer to the web-site for more detail. Correction: a lot of hard work – restoring the mill has entailed much digging and humping, apart from the brain power to plan, the money to fuel the endeavour, the sheer will to see it through. When you meet the owners you get the vibe straight away. And it's not a dour cause, rather one carried through with enthusiasm and much good humour.

We got there early which gave a chance to wander round the grounds as the barbecue was being fired up. Yum. People drifted in as food was being made available – and a pleasant evening for al fresco eating. Then a tour of the project, narrated by Jeff, as a digestif.

We started to gather in the space allotted for the music. A small but high-ceilinged room, good acoustics. Intimate atmosphere, with the doors open to the evening at the back. Emcee for the night, Bill Wilkes, (GU4, Barrow folk club, all round good egg) decided that it was time to go and started singing one of his signature shanties – a strange experience with the water wheel of the mill still turning at my back before being shut down for the performance. The metallic creakings and splashing of water seemed to match the song, like marine sound effects. Synchronicity – the music meshing with an older technology, if you wanted to explore that fancy.

Bill always runs an informal but tight gig and a good balance of music was maintained. Not the least, perhaps, because this was not a hundred per cent hardball 'folk' crowd. A couple of surprises – the usually reluctant Ed, stalwart supporter of the Barrow Folk Club was coaxed into singing and how good he was, a light but supple voice, sure of its movement and no discernible wavering from nerves. More please. Going round the room performers acquitted themselves with their usual aplomb – some excellent singers here, of course, Farmer Dave, Corrine Male, Dave Walters, Joe Tormey and apologies to any I missed. They also serve: Karen Harris in good voice, dragged from her barbecue/cookhouse duties – as was Sheila Bentham, who essayed a story with a nice twist. Mr Bentham was late on parade due to his (and Ed's) sterling work with the liquid refreshments. His rendition of 'An evening in summer' seemed to select itself...

John Adams, with accordion and soft voiced song added to the variety – as did Mr Marmion – on bouncy form, his guitar abetted by myself. (Not having played together for a long time we had a rehearsal a few days before – somewhat on the conceptual side as ever, but I don't think I played too many bum notes).

Another milestone of the night – Mr Peter Burnham was apparently celebrating his retirement from the day job, (no doubt a move to derail the more clichéd hecklers, ho ho) and much cake was handed round. He performed solo, with his old partner Sheila Mosley and as one third of GU4, tonight minus Miggy Campbell. Sheila did the old McTell warhorse and a song I have uncordially hated for many years, 'Streets of London.' In the process making me realise that it is a much better song than I realised with a strong moral message that overrides the piety. Always a valuable experience to have one's prejudices confounded. Being such a good singer helps, of course...

But not a night to single out people as all gave of their best. This was very much a communal effort, coming together for a good cause - raising somewhere around £400, I believe – with excellent food and drink and to enjoy a variety of musics – mainly, but not exclusively traditional - under the broad 'folk' banner. A very good advert for two of our strongest local folk clubs which also proved that flexibility without compromise can pay off handsomely – take a bow, everybody. This is a superb small venue with a lot of potential for future events – so a good time to mention the next fundraiser. Saturday September 18th, Tiger Folk and Grand Union clubs again but a slightly different angle – 'Stories and Songs.' Jacket potato supper and real ale on tap for £7, which includes a tour of the mill and outbuildings etc. Tickets via email from John Bentham: the.benthams@ntlworld.com – note that there will be a limited number due to space considerations so book early... 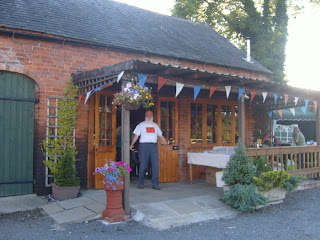 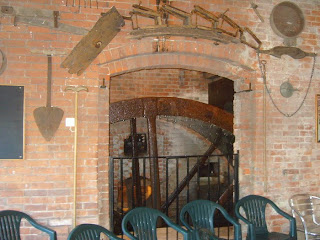 Posted by Rod Warner at 5:33 AM No comments:

There's an old mill by the stream... 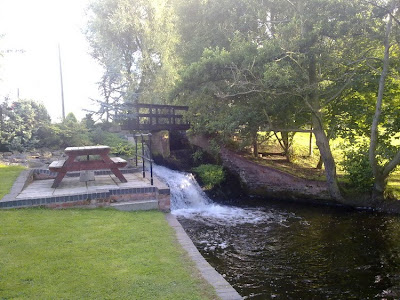 I've been incommunicado all week since the gig at the Shepshed Water Mill last Saturday - apart from a brief foray out for a rather good late lunch in excellent company the other day.  Belated review of the evening to follow...
Posted by Rod Warner at 5:20 AM No comments: