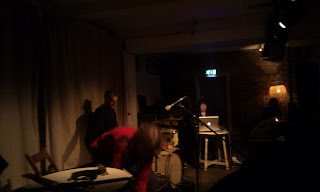 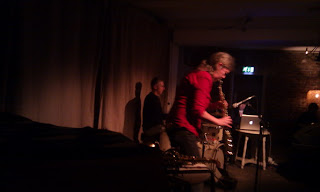 In the bleak midwinter with a vengeance...  But some warmth offered on the latest trip to town...  Sunday night last at the Cafe Oto...

The first set, three duos: Lotte Anker with Ikue Mori, Mori with Steve Noble, Anker with Noble.
Anker opened on soprano sax, easing in although they were both in the same high sound range, laptop/electronics giving chirruping undulations as Anker fenced for openings.  Sat just a few feet away from her, I saw the concentration and thought involved, part of the fascination of a live gig.  She has played with Ikue Mori before so they know each other's work but it was interesting to see her sound out the room, as it were.  They came together eventually –  equally absorbing to witness Mori respond speedily from what can be an unwieldy set up, as she did throughout.  This factor gave the night a special twist: during most improv gigs I've been to which have been weighted on the jazz side, the electronics never seem to mesh as equals.  (Especially noticeable at 'Freedom of the City').  This has a lot to do with the technology – it's not difficult to set up drones/washes of colour/various granular scrabblings but realtime fast reaction – for some -  is not so easy.  Here, for example, Anker – or Noble, can change direction/inflection etc in microseconds to respond or lead/offer a path with small muscular/breath gestures.  Unusually, in my experience, Mori was on the same footing, her small kit of electronics  and her laptop leading, blending and following with no problems of response delay/latency etc.  She came to the music via the New York downtown scene in the Seventies (starting off drumming with DNA - a great clip here of the younger Mori and co here...
), rather than from a jazz background and that often seems to be the way – that greater flexibility and imagination comes from the noise/rock/power electronics scenes, who do not sound as stodgy and unimaginative as many from more academic musical areas do.  A great opener.

Anker switched to alto for her set with Noble, more within free jazz areas, probably because of the instrumentation.  Some fine interplay, Anker a musician who is not afraid to stop and think occasionally – she has the technique down, sure, but does not seem to trot out any pet licks or coasting runs.  One of the most original saxophonists I've heard for a while.  They bent in and out of free-ish multi-level pulses and more abstract areas where sounds were sketched , layered, moulded.

Noble and Mori – different sonic spaces created yet again.  Noble has a wide range of techniques – at first sight he is playing a very standard kit, snare, raised tom, floor tom, bass drum, hi-hat and a couple of cymbals.  But as the evening progressed he produced more additions, various bits of ironmongery that are placed on drum heads, or sometimes scarily tossed aside to land with a crash.    These are struck/rubbed with a variety of sticks, brushes, beaters and hands to unroll a wide carpet of colours and options.  Small shaken instruments, maracca-like clacking  What appeared to be a large tuning fork was also brought into the sonic fray.  Noble is a tall guy with a wry face which betrays a certain sense of humour, I suspect – at one point in the night he produced a battered metronome which ticked away on a drum head as if in another universe of strictly measured time while all around it rhythms bent and stretched and multiplied.  Mori shows her musical origins - starting as a drummer, she moved to programming drum machines – and her skill at manipulating a laptop with minimal added electronics, as mentioned above, is well displayed tonight.  There is a sharp clarity and bite to her sounds, discrete pops and snaps unadorned by much effects decoration.  Operating at similar speeds to Noble, she also started to dig in with lower registers crumps and rumbles that echoed the role of bass.  I was too far away and in front of her to see what she had loaded on the laptop – apparently Max/MSP is the basis of her technique these days and she is obviously at ease with its deployment.

Second half – le tout ensemble.  An amazingly well sustained piece that held the room tight throughout.  Anker started on tenor but it seemed to get a bit muddied in the mix – those low roars from Mori especially blatting across that area - so she opted for alto and soprano, going back to the larger instrument when the air cleared for it later on.  She was happy to breathe easily, riding a note or short phrase as well as firing off longer lines when the spirit called.  It all moved together, freely improvised yet with much compositional intelligence.  They seemed to be winding down a couple of times near the end, then suddenly set off again.  Yet this was nothing superfluous, more afterthoughts that added value to the whole.  The (well-deserved) encore saw Noble swivelling almost into straight time with a couple of insistent figures that were echoed by Mori, then quickly unravelled between the trio.  And back.  Stunning stuff.  Despite the biting cold weather, agravated by the asinine tube strike, enough people came together to form a quorum who bore witness to some wonderful music, the Cafe Oto at its best, still my favourite space for music, despite the distance to travel involved...
Posted by Rod Warner at 5:46 AM No comments: