Still gently lounging in the languor of summer... posting will resume soon - honest... Probably when the monsoons strike, if the forecast is correct...
Posted by Rod Warner at 4:57 PM No comments:

Posts will resume asap - the sun has been shining in God's Little Acre - and I've also been slowed down with a bad leg... but the barbecue has been going, the red wine flowing, the company cool...
Posted by Rod Warner at 4:13 AM No comments:

Posted by Rod Warner at 4:13 AM No comments: 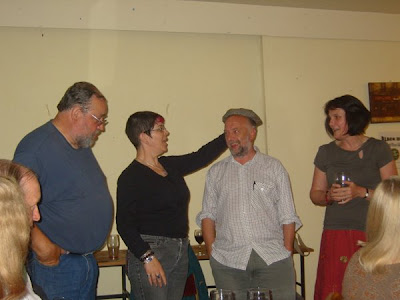 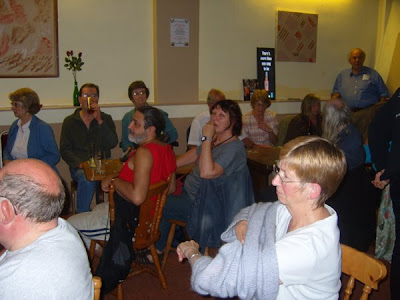 We went to Grand Union Folk Club Monday last with high expectations – and were not disappointed. It's an older crowd, in the main, strictly Old School down the line vocalising tonight, no instrumental accompaniments. And none the worse for that – the title of the gig was 'The Big Sing,' after all... And they do not sing any bigger than here – a club noted for its audience's vocal talents, where performers are always buttressed mightily on the choruses and harmonies by the power, passion and depth of feeling round the room. A democracy of voices, indeed, that frequently blurs the distinctions between guest and audience. As tonight: the billed acts, GU4 and Steve Thomason, come out of the rotating floorsingers in an organic move, tall waves rising and falling into a rich sea of sound to create a seamless evening's music. The gamut of the Tradition was on display – from songs of the sea to songs of the land, songs of work, sport and pleasure. Tough times to good times, with what I have previously termed 'The Arc of Loss' inherent in the hard-dogged, problematic journey of our island music as it moved through the various revivals to the present day somewhat backstepped tonight. For this was a joyous celebration, sung out with fire, emotion and at times ferocity, a night where it would be unfair to single out any individual performers. In their own various ways they were all good – and it is rare that I would make that statement, given my often ambivalent relationship to the tradition down the years. Rather than empty gesture, channels were opened to the past, creating a autonomous zone where, for a couple of hours and a small effort of imagination, you stepped outside of time to experience the link to long dead ages and manners. A democracy of voices – not in the sense of a flattened-out banality but an area where the stronger aided the weaker to attain some rather wonderful aural grace, however brief the duration. You might gather we had a damn good time...

Noted in passing: GU4 now have a MySpace site here... which gives a small flavour of their music... and oddly enough, for such a quintessentially English musical bash, it was Bastille Day, Le Quatorze Juillet... Marchons, Marchons... 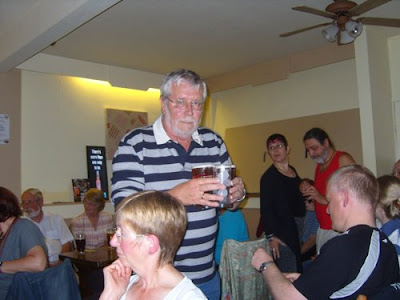 Posted by Rod Warner at 9:03 AM No comments:

Finally, after all the excitement and exhaustion – back to the music. So we beat on, boats against the current... whatever...

The Clusone Trio give the Herbie Nichols tune, '117th Street,' an outing. Always an element of drollery lurking when Bennink is involved – those crazy Dutch, eh? This swings in lightly over crisp old-school drumming as Moore states the theme and take the first solo – a limpid performance that builds through some more complex swirls into earthier smears. Reisjeger picks his cello through his turn before Moore returns for a brief passage then back in to the theme. Bennink throughout is in homage to earlier drummers mode. An odd mix of the old and disguised hints of the new, filtered through a wash of post-modernism, done with some affection...

Mance Lipscomb – a 'songster' whose material ranged far from the blues into many other areas – through 'folk' and beyond. The lines are never as straight as purists would have you believe - Lipscomb was indeed a river into which many streams flowed:

'Lipscomb represented one of the last remnants of the nineteenth-century songster tradition, which predated the development of the blues. Though songsters might incorporate blues into their repertoires, as did Lipscomb, they performed a wide variety of material in diverse styles, much of it common to both black and white traditions in the South, including ballads, rags, dance pieces (breakdowns, waltzes, one and two steps, slow drags, reels, ballin' the jack, the buzzard lope, hop scop, buck and wing, heel and toe polka), and popular, sacred, and secular songs. Lipscomb himself insisted that he was a songster, not a guitarist or "blues singer," since he played "all kinds of music." His eclectic repertoire has been reported to have contained 350 pieces spanning two centuries.' (Ibid).

This is 'Joe Turner killed a man' which builds a narrative out of a collection of familiar 'floating' verses over a thumping monotonic bass and slashes of slide (bottleneck/knifeblade?) that root it more in the blues.

Herbie Hancock from his bustout album 'Future Shock,' a track called 'Rough.' (Which matches the way I feel today – red wine too late at night!). Yeah, sure, it's a little dated but fun all the same... Ah, the outrage of the day from the jazz community... Play that funky music...

More blues – from the coupling of John Coltrane and Milt Jackson for a 1959 recording date. This is 'Blues Legacy,' a riffed-out twelve bar. Jackson up first to roll out a dazzling line, subtle yet blues-drenched as his playing always was. Coltrane takes it up, the relaxed tempo giving him plenty of ruminative space, yet unleashing those blinding flurries occasionally to spur things along. Connie Kay, somewhat surprisingly perhaps, gives out a solid if sedate backbeat throughout. Paul Chambers paces underneath like a velvet panther. Hank Jones solos, his single note strings echoing Jackson's vibes-induced linearity. Trane returns to spell out the theme. You would have thought that Kay was an odd choice for this gig, given the powerhouse drummers Coltrane was used to playing with, yet his simplified two and four here – almost r and b-ish – lets the bass take a supple role – one that Chambers was used to supplying anyway with his bandmate in the Miles Davis group. Maybe Jackson invited him – they were, of course, long-time partners in the Modern jazz Quartet.

Cecil Taylor – from his 1973 solo album recorded in Japan, this is the first track 'Choral of voice (Elision).' Not sure where I got this from – it's not one of mine, I found it buried amongst a collection of mp3s that I was searching for someone else - so homage to original up-loader. Amid the usual dense piano hurly burly, some more reflective passages. Cecil's solo work is probably the most accessible way into his unique sound world – although presenting formidable problems to the first-time listener, perhaps. But the format offers a chance to follow his logic a little more clearly...

The sun is shining here in God's Little Acre, for the moment at least, so here is some Latin fire - Tito Puente and band roaring through 'Para Los Rumberos.' A mighty sound... they cheer me up, anyway... as I do the buzzard lope round the room... 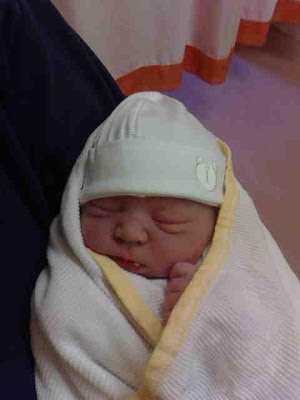 At last! The new baby has arrived - a little girl, born circa 7 a.m. Congratulations to my rather wonderful daughter and her partner. And a big shout to her mother, who has been a rock these last few days... Another grandchild... cor
blimey... regular posting will continue - when we've all had some sleep...
Posted by Rod Warner at 1:16 AM 3 comments:

I promised a commenter some more Francis 'Scrapper' Blackwell – so here's the man giving out 'Blue Day Blues.' He really is one of the missing links between twenties country blues and later urban styles – introducing more linearity via the single-string breaks, for example. No mean singer either...

From his 1967 album 'Blackjack,' this is Donald Byrd heading up a septet on 'Pentatonic.' Sonny Red solos first, a querulous piping sound to his alto. Byrd takes over, an assured performance, fast and accurate. Hank Mobley next, playing on his harder edge here. Cedar Walton, tumbling, rippling piano. Billy Higgins ensures that no one sleeps, punching the track along.

Max in Paris, 1949. This group is essentially the Charlie Parker quintet from that year with Bird out and James Moody in to partner trumpeter Kenny Dorham up front. 'Maximum,' the track. Bop of the highest calibre, stunning drums at a rapid tempo where everyone is locked onboard, not daring to jump off the rollercoaster ride – falter at this speed and you are dead...

Some more from one of my favourite big-hearted power tenors – the late Booker Tellefero Ervin and a track from one of his 'Book' series, 'Tex Book Tenor,' '204.' Woody Shaw at his shoulder guarantees superior front-line backup... Opens on stabbing piano before they hit a smooth uppish line – nothing more than an expanded riff, really, before the Book roars out straight from the blocks. Some high wild playing but always a strong thread of melody – a mix of accessible tinged with a tough bluesy edge that timbrally links old tenor keenings to the more recent avant-garde hollers – pretty much the same thing really, only changed by context and concept. Some dizzying playing here... Woody Shaw comes screaming in after him and unreels some beautifully knotted lines. The young Kenny Baron next, fleet and sure. Billy Higgins whams it all along in grand style, tracking every move, stepping up to trade with the horns . Jean Arnet solid throughout under the fire. A certain similarity to the Donald Byrd track above – the presence of Higgins on both maybe the defining factor – rhythmically supple and continually thrusting and prodding. Recorded a year later for the same label, part of that sixties Blue Note take on hard bop crossed with hints of the freer moves of the time.

Following on from that point, here's the mighty Buhaina leading one of his greatest congregations of Jazz Messengers on the stunning album 'Free for all.' I upped the title track a ways back, so here is the Freddy Hubbard composition 'The Core.' Curtis Fuller really thickened the usual band sound, adding deeper sonorities and expanded instrumental options apart from his soloing skills – this is BIG sonics. Wayne Shorter takes off first, sounding urgent – as how could he not with Blakey's firepower at storm force behind? Freddy Hubbard next, speed, accuracy and ideas – a man who was at the height of his game. Fuller cools things a fraction – the trombone does not quite soar timbrally as much as tenor and trumpet over the thunderous, dense backdrop. Fluent – you are aware of the J.J. influence perhaps, but with a more 'tromboney' sound, if that makes sense, a pleasing gruffness hinting at earlier stylists. Cedar Walton stomps in for his piece of the action before the razor-sharp ensemble returns for the theme. Blakey is just plain WILD throughout... I remember hearing this when it came out in the U.K. so many years back and it excites me just as much now... and I saw Blakey with a late manifestation of his band in a rather odd venue and when he was getting on in years - but the sheer force of his drumming was intoxicating, belying his age...

Opening on overspeeded drums (courtesy of DJ Ninj) as the mighty Derek Bailey slashes in and pours his hard scrabble guitar all over the first track of his 1996 album 'Guitar, drums and bass.' 'N, J, BM (remix)'. Improv meets the London street sounds of the time... I think this is a very underrated album: oddly, the rather staid programming lets Derek fly, acting as an earth to his fire... Or something...