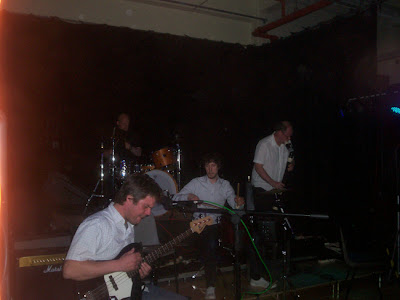 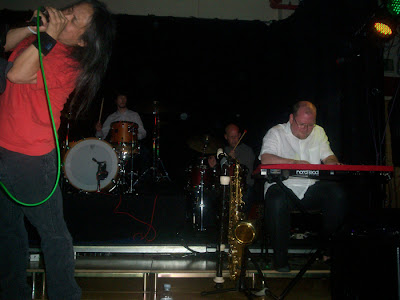 To the Quad Studios... a schizophrenic night – in the roles of observer and participant... The venue is in a part of Leicester where many old industrial properties are being converted to new uses. Not far from the centre of town and a great place to play – but if you don't know the area, a difficult place to find... As the promoter's nerves were being stretched further, the audience started to trickle in, building to reasonable proportions. The Quad is a factory converted into well-equipped rehearsal studios with a large reception area where the stage has been set up. Black Carrot and Dragon Not Emperor (their overlapping duo off-shoot) had extensive sound checks due to the amount of percussion to be miked up, presumably. We did ours fairly quickly as I had decided just to bring a laptop and Murray a guitar to keep clutter down to the minimum – although during our set I think the laptop did some strange things here and there, due to the varying sonic ranges and granularities of the samples I had loaded. There was another minor panic at one point when the promoter received an enigmatic text message which looked as if the star of the evening, Damo Suzuki, was having to pull out at the last minute. Apparently a wrong number – but it provoked a frisson or two... As a gig organiser on and off for many years, I know only too well how the stress levels rise and the lure of strong drink is all too irrestible – until all your musicians are assembled and there is an adequate audience to play to. But it was all coming together – Damo duly arrived and soon the first band started up:

Dragon or Emperor – a duo tonight, Stuart Brackley on bass/lead vocals and Euan Rodger on drums and vocals. Opening on a thumping beat that was a signature in many ways for the night – always underneath the sonic mayhem to follow there was some kind of rhythmic guide. Then the bass snapped in and Stuart proceeded to fill out the sound thoroughly – lead and rhythm simultaneously for large sections. His voice is like a third instrument - the vocals are blurred and somewhat indistinct but this is more about sound/texture and meshing as a third line. Certainly he has an extraordinary voice – vibrato-laden in a way that edges towards the ageing fop Ferry as an easy reference point – but a light year away in what he does with it. Dragon or Emperor start the proceedings on a high level and are well received.

Some re-arrangement: Tom at the drums now as Euan comes downstage to his percussion kit and Black Carrot assemble. I once compared what they do to the type of punk-jazz that was coming out of New York when James Chance and Defunkt were Downtown and roaring but tonight they are nearer to rock (pointed up by Stuart Brackley playing electric rather than acoustic bass tonight)– with their own twists and bends and improvisational ethic that combine to make that somewhat addled form still interesting. A deeply visceral sound, often rooted in the bass lines of Brackley who leads the band melodically for much of the way (and sings in that wonderful open-throated voice), with Oliver Betts starting out on the weird instrument I figure was some kind of bass-recorder, miked up, switching to seamy, smoky tenor sax further on in. I remarked above that the night was based on a tribal stomp motif in a way – and this is what brought the disparate tribes together, perhaps. But what makes Carrot interesting is that they don't just stay there... the two-drum lines will start with simple figures that quickly splinter into syncopations, as the bass roams the airwaves from deep to high up the neck and Ollie's horns fill in the gaps, Stuart's vocals plead and seduce... speaking in the tongues necessary – as a fascinating forerunner to Mr Suzuki. What I've always liked about this band is to the fore tonight – flexibility of strategy, backed by an inside/outside selection of moves that gives a pathway in for audiences even as they subsequently take them to strange places – and bring them safely home. It's that tribal boom boom – that dissolves into more complex rhythms and sounds but is always implicit, like a heartbeat. A great set... 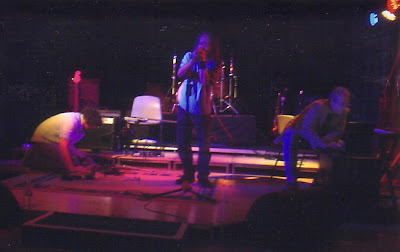 The tribal boom boom of Plexus is maybe not so immediately obvious. Playing as a duo tonight – our original line-up – it was the Old Firm: loud, dissonant, and free-flowing with, however, an insistent four four loop slowly dragged in at the bottom as some sort of anchor. Damo Suzuki famously never rehearses – so neither had we (which would have been absurd anyway as most of our music is improvised on the spot). I can't comment much on our set as I was in the thick of it musically – stage left at the laptop with Damo in the middle and Murray to the other side. He gave up a sonic firestorm on his guitar – feedback, bows, mallets, knocking the shit out his instrument. Somehow – and it is a testament to Damo Suzuki's inherent professionalism – and flexibility and freshness of imagination, because professionalism on its own as technique say is nothing without those more elusive qualities – he quickly found a space in the music – and locked into it. I have no idea how long we played – fifteen, maybe twenty minutes as we were lost in the performance, guided solidly by Damo's wonderfully weird vocals – of which more below, when I had a chance to be an observer...

The main set of the night: Damo Suzuki with Black Carrot and the inestimable Mr Teledu added on guitar. Oliver Betts now on electric piano. That stomp started up – the guideline and a heavy rhythm was kept up throughout – criss-crossed by the invention of the two drummers. Bass receding somewhat to lock things down as Dave T's guitar lashed out some sparse figures, at one point bottle-necking fluid treble glissandos. Ollie launching into some forearm and hand-chop clusters in places, reminiscent of Cecil Taylor. Suzuki meshes with the band seamlessly, flying over the frequent stop-time breaks, his voice coming out of the rock tradition but going into very different places. He makes it look almost easy – but it's not. A slight man who exudes a calm centre, he has a surprisingly wide vocal range, sometimes descending to a deep roar that surges from some bass area channeling Beefheart and Howling Woolf – a trace of Louis Armstrong's scatting? - with maybe something intrinsically Japanese tonally mixed in. An improvised, abstracted vocal blending the melody and the rhythms seamlessly with the backing musicians, sung with a fervour that rivals a Pentecostal foray into speaking with tongues crossed with a lash of Zen... a shamanic performance as Damo sings in a language of his own invention. He retains vestiges of the old hippie idealism from a more innocent time (his musical origins in Germany as a street performer and his tenure with Can) – yet he is not some old rock panhandler out doing the retro-revival circuit. None of the dinosaurs would have the nerve and grace to travel the world and perform spontaneously as Damo does with his selected 'Sound-Carriers:' musicians who come together locally to play with him – which ensures that he keeps each appearance fresh. Maybe sometimes it won't work, due to the high-wire nature of his game, the chances taken. Tonight it did... I speak for all the Leicester Sound-Carriers – it was a great privilege to perform with Damo – and fun, too! 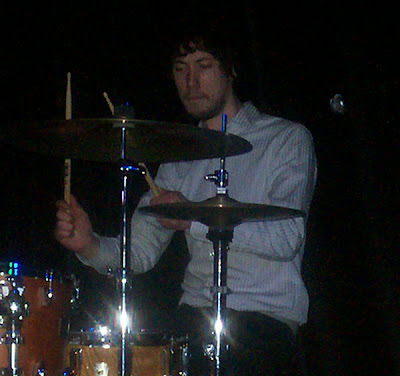 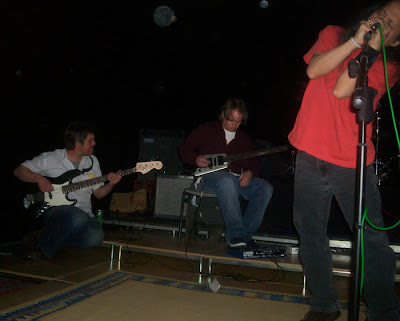