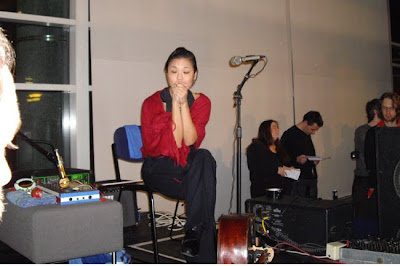 The last day. John Wiese and Karen Constance first up in the hall – big sound from the start: noisepower electronics at their dandiest. Full-blooded – the auralspace crammed with events, crushing smears of sound interspersed with what were either samples of quickcutting short wave radio fragments or done live - looped. On the outer edges of the mix scattershot punctuations, pops and sharp rips, like electro rimshots. A deep storm of bass rising steadily to sail it on with some higher tones held to give almost melody. Again – a set that uses the available time allotment to the full, content producing form just so. Boding well for the rest of the night, a very good start and mood setter. 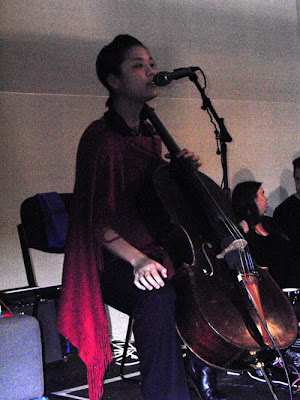 So: Hector's House for refreshment then back to position myself for Audrey Chen, whom I have heard a lot about so was prepared to get a good spot up close. Not to be disappointed – her performance was one of the high spots of the weekend. Cello, voice and some minimal electronics, this was more the acoustic side of improvising, nakedly so in such a crammed space. She came across as very poised, sure of her ground. Using what looked like a chopstick jammed in to the cello strings, flicking it to produce a clunky ostinato as she vocalised through a wide range of sonics, pure tones mixed with more distorted granularities from throat and lip movements. Apart from her orthodox musical training at the Peabody Conservatory in her home town of Baltimore, as Chinese-American, I wondered if her technique was enlarged further by the other half of her cultural background, the Chinese family of languages using a higher vertical range of sounds than English/American and subtle tonal shifts. With the bow, she utilised all the surfaces of her instrument beyond the strings, a vigorous rubbing that produced more extensions of sound. She also introduced two connected rubber/plastic balls – maybe a toy? - to scrape on the back of her miked-up cello to give further extension/possibilities – in fact, one could say that it is surprising how much variety such a basic set-up can produce. This was a sublime performance that held the tightly-packed audience for its duration, coming to final ground on a vocal shift nearer to the western orthodox, perhaps a slight hint of jazz/blues in the held notes?

Compelling and, for all the expertise and control, deeply and rawly emotional... 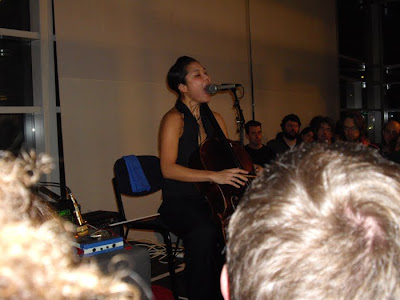 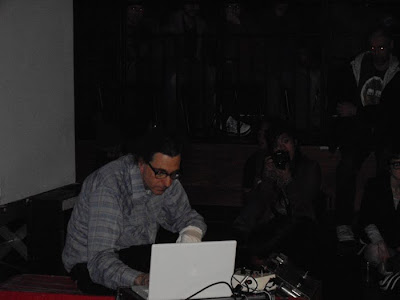 Joseph Hammer sat at the back of the hall in front of his Apple Mac and other equipment, his left hand swathed in a white glove (which I assume was not some homage to Michael Jackson but needed to handle the tape spooling through the recorder he was manipulating), as his right focused on his laptop. He produced short snippets from various recorded sources one assumed, a voice here, a drum beat there, a shard of guitar, looped, processed and slowly moving to build a complicated piece, layers moving in and out, the minimal nature of the individual fragments and their slight duration when thrown together giving a complex carnival of sound that echoed earlier pioneers like Steve Reich. This approach tonight just made it to the end of the set without palling – the repetitions on the edge of needing more development. High wire – but great stuff... 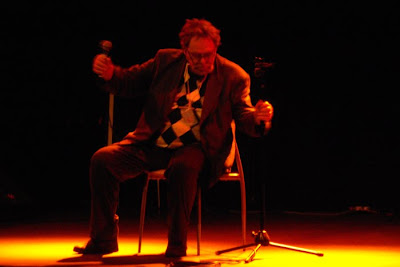 Sten Hansen I had seen wandering around the festival over the weekend favouring a walking stick but tonight he gamely walked out on stage, with some obvious difficulty. A historical figure, self-taught as a composer, active in the electro-acoustic scene and beyond since the early sixties, a pioneer who is 'one of the forerunners in the field of multi-media art.' He spoke amusingly as he explained and cued off various works that exploded words and fired them all over the joint, speeding, slowing, spinning the recorded voice wildly and joyously through the space of the hall. There is a selection of his work available on Ubu .

Coming from the more academic side of experimental music, but his work never seemed dry or dessicated as much of that genre can be. A lot of fun among the intelligence here... 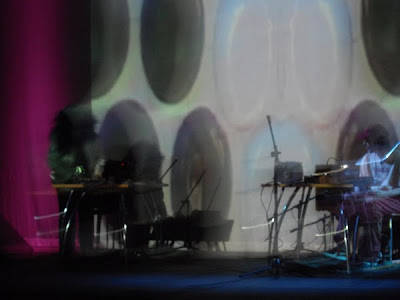 Which leads neatly to the last act of the festival and the night. Ju Suk Reet Meete and Oblivia, both members of Smegma, the wildly innovative Portland grouping and the wild eclecticism that fuels that worthy band is on display tonight. With a vengeance... one clumsily wrestles with words trying to tease out the mash of genre streams on display here... Oblivia (AKA Rock and Roll Jackie) resplendent in blue wig gave out on 'found sounds through modified and weighted turntables,' while Ju Suk did his stuff on cornet, some kind of lap guitar and a rig of sound processing equipment. They played against a stunning visual back drop, close-up images from nature – a bubbling tar pit/hot spring, barnacles on rocks by the sea – and a barrage of abstract and surreal juxtopositions giving an amazing density. Added to the music, you had a complete show that went the distance without flagging. Oblivia turntabling a variety of musics – at one point hillbilly guitar and violin hee-hawed through – as Ju Ju Suk alternated free jazz spluttering lines on his horn with slide guitar figures that evoked the blues, country and rock and roll. Hard to describe how all this fitted together but it did – maybe an object lesson in how Keat's 'Negative Capability' - 'I mean Negative Capability, that is when man is capable of being in uncertainties, Mysteries, doubts without any irritable reaching after fact and reason' meets Ornette's harmolodics, where disparate lines create enough space to both accept incongruities and resolve them on other levels. Mind-blowing, as we used to say and a fitting end to another great festival here. 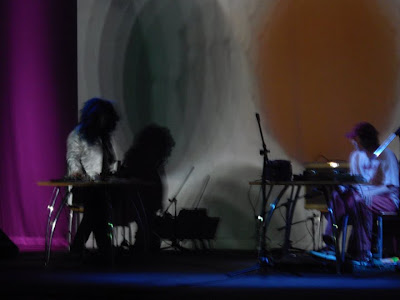 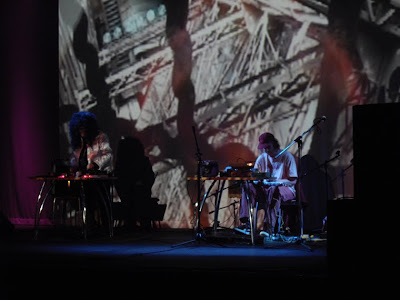 Very much enjoyed reading these comments, even plugged it in my own!

Rod, just in case you hadn't heard yet, Mervyn died a couple of weeks ago. His funeral is Friday 13th at Loughborough Crem, 3:30pm

(I found your references to knowing him via Google)

I did know, a friend phoned me when I was in Brighton with the sad news... and I had only been talking to him on the phone the day before he died apparently which was weird - he sounded on good form... bit of a shock, actually, as even though he had been in poor health, the last couple of times I saw him he looked very well and had lost some weight...
My daughter and I will be there tomorow to pay our respects... and be down the Swan later...
But thanks for the thought, it was kind of you to track me down! He wll be missed...

I popped into the Swan at lunchtime yesterday & decided that neither of the Barflies were your good self.

I was pleased to see that the poster for Mervyn's 1995 retirement Party was still in pride of place to the right of the Bar. I wanted to go to that but couldn't for some reason or other.